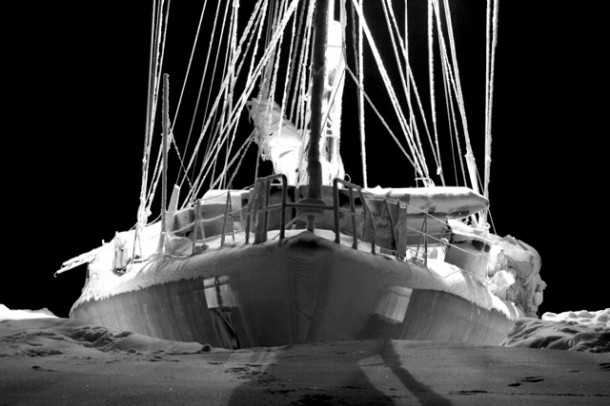 ‘Pole to Pole’ recounts the journey of photographer Vincent Hilaire in 2007 and 2011 to both ends of the earth on board of the Tara.The series of images convey some of the unusual atmosphere that prevails in these still untouched areas. The black & white images reinforce this impression of eternity that reigns in the parts of the world; these landscapes appear to have finally stopped the mad rush of time.
“From the beginning, there was the great port that opened out over the Mediterranean – Marseille. A circle of sailors and artists. And the recent adventurers and romantics – Kessel, Conrad, Heyerdahl, London, Hemingway, Saint-Ex’, Frison-Roche. Puis Moitessier, Jean-Louis Etienne, but also Coelho, Coloanne. Let us not forget the documentary makers – Cousteau, Tazieff, Zuber and others.

And then there is photography for telling and recounting stories. My first camera, an instamatic, my hand trembled as I held my first pen, my first camera. With that camera I was able to cut up and capture my first few morsels of reality. The texts flowed naturally from the images, from my desire to describe those intimate moments in words. My first publication – in a press magazine.

On the streets of Paris my passion for black and white photos deepened. My apprenticeship with Jean-Loup Sieff; Montmartre and Jemmapes Quay had changed but Doisneau’s subjects were still everywhere. The chasm between the city and the country, the never ending curiosity of the countryman as he looks towards his city cousins life, the chasm between them inspires me. As change creeps inevitably closer but the distance remains between the urbanite and the villager. While I was still a student and studying in university I tried my hand at radio and broadcasting.

But, I was devoted to images and above all to photography. I am married to my profession; it is a labour of love. It was photographic journalism that put the ring on my finger. I expanded my vision and learnt to include images that move and to observe life as it appears in the viewfinder of a news camera. Everything is black and white through the viewfinder. Little by little, I developed my work, as ever mixing writing and images. Eventually I moved from behind the camera to in front.

As for voyages and great expeditions, Western Europe has its attractions, but it is adventure that I search for and crave. The Moroccan desert in 1993 was able to briefly quench this thirst, but also give rise to another lasting desire, wanderlust – the never ending quest for adventure and its poetry.” www.vincenthilaire.fr