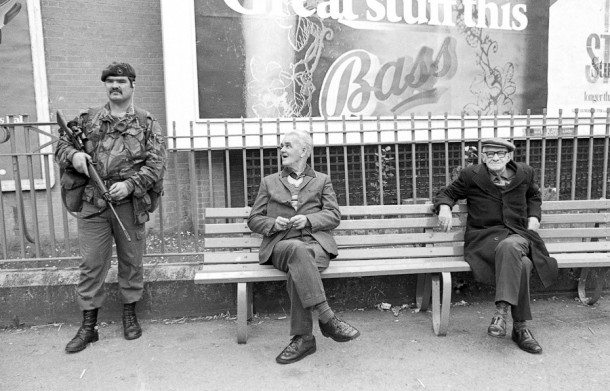 “The photographs are like black and white time machines that bring back the desolation and danger of the Troubles. The images have a documentary accuracy, but it is the aura of melancholy witness that marks them as the work of Seán Hillen.” – Seamus Heaney

The photographs in the Seán Hillen Collection are unique local insights and are largely unpublished. In 1979 the Newry-born artist Sean Hillen began taking mostly black-and-white photographs recording the ‘already surreal‘ life as he saw it in Northern Ireland, and between then and 1990 created a collection of several hundred photographs.

The earliest photographs were taken by 18/19 year old Seán Hillen, then a student at Belfast College of Art, later moving on to study at the London College of Printing and the Slade School London. The collection includes photographs of the H Block Campaign (1980) and the Hunger Strikes, particularly the death in 1981 of Patsy O’Hara and the related Bogside rioting in Derry. The photographs also document Orange Parades and Roman Catholic Processions, both in Newry and Belfast, between 1979 and 1990. In recent years, Seán Hillen has revisited a number of these photos, using them in his celebrated photo-collage artworks, and by way of background when co-designing the Omagh Bomb memorial. Seán Hillen has indicated that he will make donations of further related material to the NLI, in the coming years.

Attending art schools in London, and travelling back-and-forth to take the photos, Hillen says he felt increasingly compelled to document what he saw and ‘distil some record’ from life during the conflict, notwithstanding the complication that photographing the ‘security forces’ at work was by definition illegal. He brought to his photography a point of view perhaps made more strange by the move to London, and an engaged and informed eye – Hillen had grown up listening to gunfire almost nightly and had himself been arrested for stone-throwing as a teenager.

He believed in getting close to his subjects, quoting Robert Capa: “if your pictures aren’t good enough, you’re not close enough” and used almost always a very wide lens which acts as a perspective device and tends to suck the viewer into the space of the photo.

Aged 18 in 1979 he photographed the 12th of July parade in the Centre of Belfast, and then some years later, events at ‘The Field’ outside Newry, where the equivalent Orange marchers assembled, speeches were delivered and chips and ice-cream consumed.

Several of the photographs later formed the basis of Hillen’s celebrated photo-collage artworks which are themselves widely studied and held in significant collections. It is significant perhaps too that Hillen co-designed the Omagh Bomb Memorial.

In 1981 he photographed the massive funeral of Hunger Striker Patsy O’Hara, and took a long sequence in the ensuing rioting around the rubble of buildings at Derry’s ‘Aggro Corner’. Around 1990 was an annual Easter Republican commemoration in Newry, where another ice-cream van waits for the small crowd at the graveyard gates.

There is an empathy in the engagements with the people featuring in the photos which often verge on portraits, and a sense of complex human beings caught in a maelstrom of allegiances and antipathies.

Individual photos also convey arresting dramas- an older woman walks down the Falls Road where a freshly-destroyed once-ornate cinema tumbles its innards on the pavement beside her. A neighbour of Hillen’s shows the enormous bruising caused by a plastic bullet fired during his arrest, and at a moment of pause in the rioting, a teenage stone-thrower stares down the camera through eyeholes cut in his Celtic-scarf mask.

There is a compelling beauty to many of the images though an undercurrent of menace often remains, reminding us of the psychic as well as physical cost of the conflict as well as its nearness in history and its increasing distance too.

Roy Foster, Yeats’ biographer and Carroll professor of Irish History at Oxford said the exhibition “demonstrates once more Sean Hillen’s unique vision, and his eye for a powerful and disturbing conjunction of images- applied to the stark tragedy of the Northern Ireland experience thirty years ago. Striking, haunting sometimes bleakly beautiful: a record of historical importance but also much more.”

Opening day: 6pm Thu 26 Jul
The exhibition will be open by Don Mullan, author of ‘Eyewitness Bloody Sunday’ and co-producer of the film ‘Bloody Sunday’.