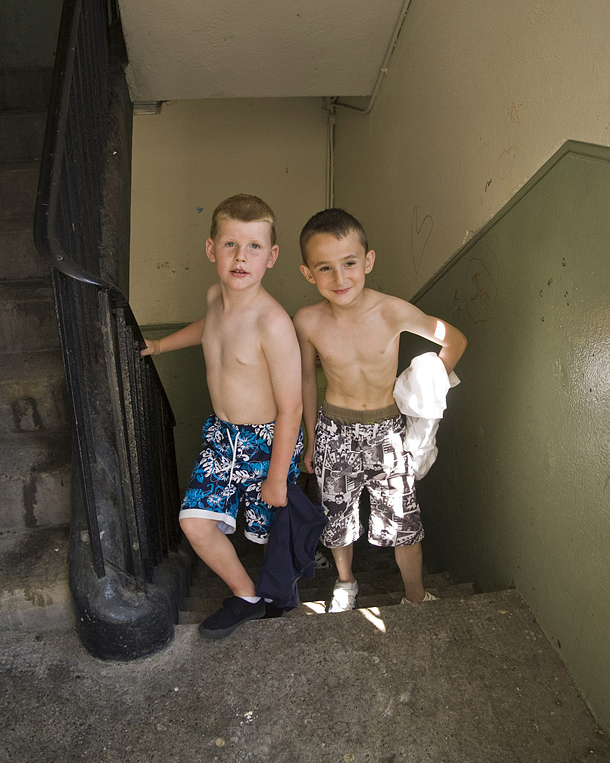 “Jeanette’s engaging photographs portray a positive side of inner city life a lot of people never get a chance to see. By choosing to hold her exhibition inside a flat in Pearse House she goes one further and invites us in to witness this vibrant community first hand.” – Ray Yeates, Arts Officer, Dublin City Council.

‘The Flats: Memories, Perceptions, Reality’ showcases Jeanette Lowe’s photography of the people and the environment of the Pearse House flats complex in Dublin City taken between 2009 and 2012. The exhibition includes Lowe’s photograph ‘Beach Boys’ which was exhibited as part of the Taylor Wessing Portrait Prize at the National Portrait Gallery, London in 2010.
A vacant flat inside Pearse House has been transformed into a unique art space. Having the exhibition inside a flat fulfils two important objectives for Lowe; to engage with the local community by bringing art inside The Flats and to encourage people from outside to come into the complex that might not otherwise venture in.

Lowe’s photographs document the social and built environment of Pearse House, “which is still the largest municipal housing structure in the Irish state” (DCC). This project grew out of her memories of visits to her grandmother, who raised a large family in Block E of the flats, one of which was her mother. She had not been in the flats since she was a child when she started this project. She quickly realised that her perceptions of The Flats were far from the reality that she discovered while taking her photographs, which offer vivid glimpses of this vibrant community with a rich heritage living somewhat invisibly within the heart of Dublin City. Now she invites us to view the people of the flats and their environment – not just through her photographs but by walking us in to the heart of this community to view the exhibition.
Migration within The Flats is widespread. She has met and photographed families who have always lived there, many who remember her family, and others who although living there for over twenty years still affectionately refer to themselves as ‘blow-ins’. Families move within the complex, marry and move in and out. Some can’t live away from them.
Old photographs of the area collected from residents past and present are exhibited alongside Lowe’s contemporary photographs.

During the exhibition there will be walking tours and events on the architecture, heritage and stories from the area.

Jeanette Lowe is a contemporary photographic artist from Dublin. She has exhibited at the Royal Hibernian Academy (RHA) Exhibition in 2012, 2011 and 2010. In 2010 she was one of 60 photographers from 6000 worldwide to be selected for the Taylor Wessing Portrait Photography Exhibition at the National Portrait Gallery in London. She studied photography and digital imaging at the National College of Art and Design and holds an MA in Creative Digital Media from DIT.
www.jeanettelowe.ie