Amelia Stein, The Big Sky and The Palm House 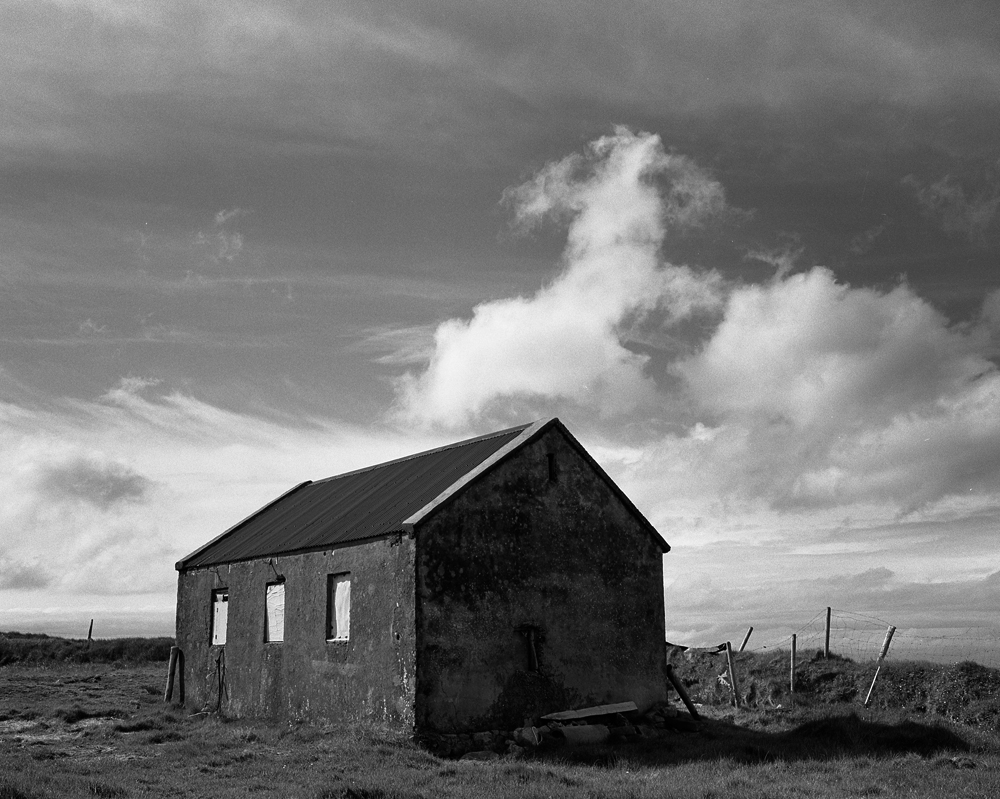 The Big Sky images were made over recent months in the epic landscape of Co. Mayo. Here, visiting locations that have become increasingly familiar to her. Working with traditional film, the large format, hand held Mamiya, translates truthfully the drama of light, weather and isolation that descends on this corner of Ireland. In each composition the sky envelops the presence of man, a shed, a ruined cottage, a half-open gate. The narrative may seem familiar but the technique feels almost painterly. Amelia Stein speaks about waiting for the photograph to find her rather than chasing the elusive image. The fluency of the Big Sky images shows that her patience has been rewarded.

The Palm House photographs were made in 2001 in the Great Palm House in the National Botanic Gardens in Dublin. It took two years to complete this series allowing time to record seasonal changes in the lives of the tropical planting, the unique pot and tub culture and all the nuances of light refract through the glass of this great Victorian building prior to its restoration. This year, Lilliput Press released a publication entitled the Palm House with an introduction by John Banville and botanical text by Brendan Sayers. A limited edition copy with a single print included is also available.

Gallery Talk: Thursday, 12th July 2012 at 6pm
Amelia Stein will give an introductory talk on the exhibition.
RSVP for this talk is essential. Tel: 644 9459 / info@oliversearsgallery.com

Amelia Stein, RHA (Irish, b.1958) lives and works in Dublin where she was born in 1958. Over the past 25 years Amelia Stein has established herself as a singularly exacting photographer. Her area of expertise has been portraiture, working with actors, performers, playwrights, poets, authors, musicians on commissioned images and on production photography in the Irish theatre. She has also assembled a number of personal exhibition which have been seen in selected galleries throughout Ireland: In Loving Memory (1989), Triur Ban (1995), Palm House (2001) and Loss and Memory (2002). Amelia Stein’s work is characterised by meticulous attention to details in tandem with the attributes of fine black and white photographic printing, many of the images having a theatrical presence.

The Palm House, photographs taken in the Great Palm House at the National Botanic Gardens in Glasnevin, Dublin, over two years, is now in the collection of the OPW, Ireland. Much of her work addresses the universal subject of loss and memory, absence and presence. Loss and Memory, 2002 are the dark and intimate still lives of her late parents personal belongings and household items. Perhaps her magnus opus to date is her study of the member of the Royal Hibernian Academy which was published as a book in the year of the opening of their new and refurbished premises in Ely Place in 2009. Here her ability to identify the metaphorical potential of objects combined with her keen isolation for the meaning full close-up and her tried and elegant skill to draw out the character of a face.

Stein’s strategy was to hunt the personality of the artist through creating images of them in their studio through a facial portrait, an image of their hands and a study of their chair, or the tools of their practice. Amelia Stein became a full member of the Royal Hibernian Academy in 2004 – the first photographer ever to be elected to that body. In 2006, she was invited to become a member of Aosdana.
www.ameliastein.com