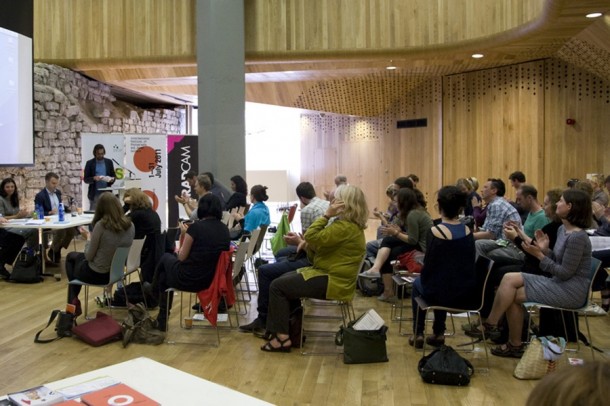 On Migrations:
Images, Lives and Objects

A one day symposium around the themes of migration, diaspora, the exilic and filmic and photographic representation brings together a number of international speakers, researchers and artists to address these themes from a number of different perspectives.

The issue of the migrant, migration and its visualization in contemporary discourse continues be a site of struggle and contestation within the media, political debate, cultural and social and protest movements. Artists, filmmakers and photographers have engaged these discourses making significant interventions across diverse sites and spaces. So against a rich backdrop of existent practices across a number of institutional sites and geographies, we are interested here in examining our current moment and how that has shaped and reshaped the landscape of migration and migratory practices through their visual representation, documentation and narrativisation using contemporary research and arts and media practices.

Any attempt to examine then will inevitably brings up issues of globalization, economics, conflict, governance and sovereignty as well as the control and policing mechanisms servicing the imperatives of the market and state but in between these lies the micro and local movements of individuals and communities across borders and space over time each with complex and overlapping histories, narratives and experiences.

Although the Irish experience of outward migration has been historically a powerful constitutive narrative of the nation, we are interested in going beyond this to engage and embrace other images, experiences and examples that complicate and problematize this especially since Ireland has witnessed inward migration of unprecedented proportions. With the movement of people from East to West, from Asia to Europe, South to North in the Americas and Europe, etc., these movements already precarious and fraught with danger for migrants themselves are now heightened with economic austerity.

Artists, researchers will present on current and recent work that engages these themes across a number of different geographies and experiences using a range of material and examples. There will also be a special screening of The Mexican Suitcase (2011),an award winning documentary and an interview with the director Trisha Ziff (via Skype).

All guests are invited to assist to the closing party of Isabelle Pateer ‘Unsettled’, from 7pm at The Copper House Gallery.

Alice Feldman works in UCD School of Sociology and is the Co-Director of the Migration and Citizenship Research Initiative and has over the past 15 years addressed the social and policy dynamics of ethnic diversity, migration and social change in local, national and international contexts. I have also served in a variety of research and advisory capacities with a number of NGOs and agencies in Ireland involved in interculturalism and integration.
Avtar Brah defines ‘diaspora space’ as the nexus of genealogies and geographies of dispersion and staying put. And while typically occluded by a pre-occupation with those arriving from beyond state borders, the stories of dislocation of ‘native’ Others unsettle taken-for-granted assumptions and oft-essentialising conceptualisations of ‘the migrant’ that underpin both academic and creative practices. Their experiences not only expose further nuances of the nation-state’s subjugating fictions of legitimation; they constitute windows through which to interrogate the histories and operations of regimes of socio-spatial relegation, and the ways in which their legacies permeate the grounds of encounter between ‘indigenes’ and ‘migrants’ in contemporary ‘host’ societies. This paper explores these dynamics through discussion of a digital storytelling workshop undertaken as part of the project Placing Voices, Voicing Places.

Anthony Haughey is an artist and lecturer/researcher in the School of Media at the Dublin Institute of Technology where he is also a PhD supervisor at the Centre for Research in Transcultural Media Practice. He has a number of photographic publications and has exhibited internationally where his work is represented in public and private collections. He has a show currently running in Belfast Exposed Gallery entitled Settlement running until August, 2012. anthonyhaughey.com
He will present and discuss several experimental collaborative projects with migrants designed to heighten critical awareness for the ethical implications, social and political impact and cultural issues associated with the effects of exclusionary migration policies of the state.

Elena Moreo is a researcher in the Migrant Networks Project, Trinity College Dublin. Her research interests concern the areas of migration, asylum, representation and epistemology. Her most recent publication, co-edited with Ronit Lentin, is ‘Migrant Activism and Integration From Below in Ireland’ (Palgrave Macmillan, 2012)
Albeit very different in inspiration and style, Goldberg and Fazzina’s photographic projects engage in a type of “documentary storytelling” which is both formally ambitious and self-questioning.  In my discussion I focus on how they indirectly address problematic issues that dog contemporary photographic reportage – namely the immigrant as spectacle and the desensitisation of the viewer through the sheer volume of images of suffering.

Rania Gaafar is a research associate in the Media Art department at the University of Art and Design in Karlsruhe and is a PhD researcher in Goldsmiths College, London. She has published on cinema, media and art and recently co-edited with Martin Schulz, “Technology and Desire: The Transgressive Art of Moving Images” (Intellect, 2012).
The ‘Arab Image Foundation’ has been established as a non-profit institution in Beirut in 1997 in order to  “preserve and study photographs from the Middle East, North Africa (MENA) and the Arab diaspora.”  It has archived over 400.000 photographs from professional and amateur Arab photographers to date from MENA countries and represents one of the first visual and archival institutions to deal with the photographic history of the Arab world. Its cross-disciplinary interest lies in an almost laboratory theoretization and artistic enactment of the relation between the discourse of archive and memory  – against the background of the advent of the digital – and artistic practice and research as a contemporary turn in art theory and curatorial studies (cf. documenta 13 and its focus) for instance. This paper focuses on the concept of performativity in the photographic archive, the photographic image’s intentionality in relation to time, its performative appearance and materiality as well as the migration of forms in relation to memory. A site of visual art practice, digital archiving and materialized reflections on the traces of memory, the artistic and theoretical impetus of the AIF seems to be an ongoing investigation into these apparently ‘non-representational’ concepts.

Mairead McClean is an artist and filmmaker whose work engages themes of memory, identity and migration. Her most recent film installation ‘Moving Lives’ was commissioned by The Ulster American Folk Park/Museums of Ireland and presented migration stories, past and present, from 22 participants from 6 different countries, in multi-screened installation in a 17th Century Masshouse in the Folk Park itself. ‘Bell(a)exchange’ a solo show made for the Void Gallery, Derry, in 2007 was subsequently selected for an award by Hou Hanru, Director of Exhibitions, San Francisco Art Institute at Ev+a 2008, Limerick City Art Gallery, and chosen by Lizzie Carey Thomas, Curator at Tate Britain, for The Claremorris Open 2008, Ireland. Her award winning 35mm, short film ‘Way Past’ was screened at International film festivals and artwork recently published in Filmwaves Magazine, UK.
This talk reflects on the relationship between the photographic image, history, and memory. Can photographic or film narratives provide opportunities for disrupting and restructuring one’s own history? What is the relationship between memory and the photographic image? The talk will present parts a multi-screened installation Bell(a)exchange (2009)  a piece that centers on the story of McClean’s maternal grandmother who left Ireland in 1909 to work as a Bell Telephone Operator in Montreal, Canada and Mairéad’s own journey in 2006 retracing those steps.

Veronica Vierin is an artist/photographer and PhD researcher in the Centre for Transcultural Research and Media Practice at DIT. Her research project is a visual and textual ethnography of immigrants in the Porto Palazzo district of Turin. She has presented her research and exhibited her work widely.
Her presentation will address the concerns encountered in field work and research with migrant subjects in Turin engaging the recent work of Ariella Azoulay’s The Civil Contract of Photography (2008).

Trisha Ziff is a curator of photography and documentary film maker whose films focus on the photographic image. A Guggenheim scholar, her exhibitions have been seen at major international museums including: Victoria & Albert Museum, London; California Museum of Photography, international Center for Photography New York and Centro de la Imagen Mexico City. In film, Trisha Ziff has directed Chevolution, 2008 Magnolia Films, Red Envelope and Fortissimo Films and Maleta Mexicana, the narrative of the recovery of images from the Spanish Civil War, which she was personally involved in securing in Mexico – negatives by Robert Capa, Chim and Gerda Taro. Trisha lives in Mexico City with her son Julio.