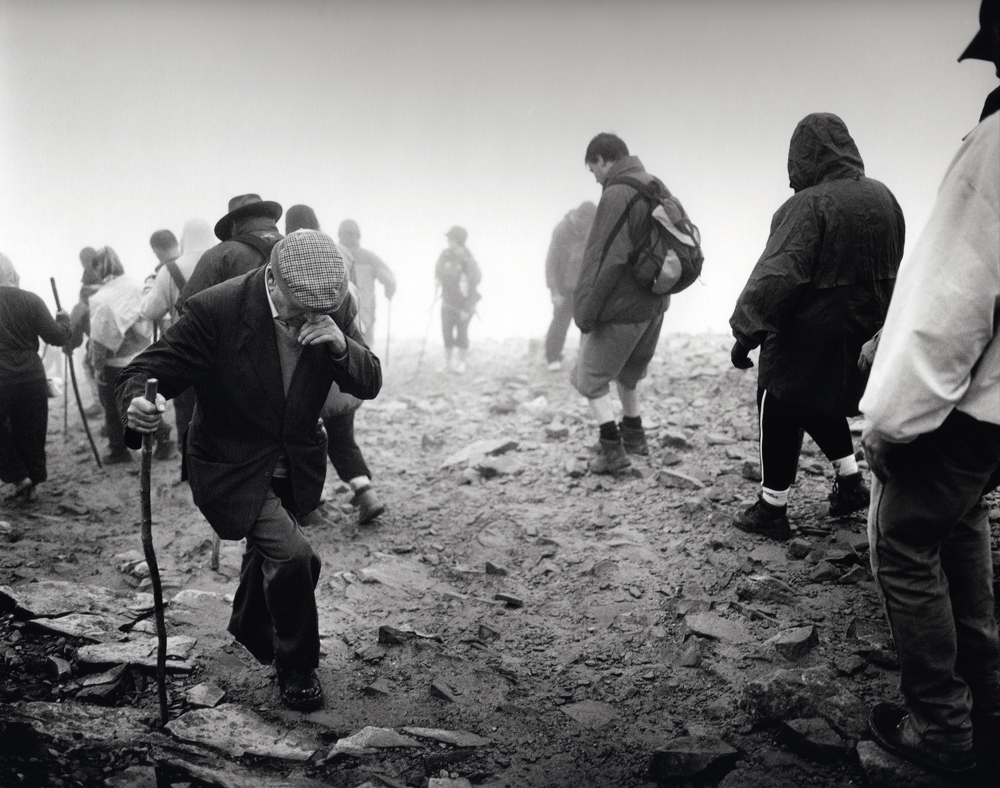 On the last Sunday of July- thousands and thousands of people, year after year make the same journey. Their goal is to reach the top of the Reek – that’s what local people call the sacred mountain of Ireland – Croagh Patrick. Right at the top, there is a small church, which opens only once a year – on Reek’s Sunday. Everyone who makes pilgrimage does it for his or her own reasons – but for all of them – this is a spiritual journey and Sergey wanted to share that feeling with them.

He has been leaving in Ireland for the last 10 years; he passed through good “boom” years and through the very difficult ones like now. Through his pictures Sergey shows us that traditions, spirituality and heritage are still kept alive. He also keeps the traditions in photography – that’s the reason why he uses the black&white film that gives us the feeling of the space and emotions. Sergey develops and prints his photographs by himself, using the same formulas as they were in the beginning of the 20th century.

The prints are made on the paper with a high content of silver in the emulsion, the same way as it was done in 1950-1960th. It helps to get the sense of the time and space.

Sergey was born on the South West region of USSR, near the Black Sea, in 1973. He received his first camera at the age 10 and with help from his uncle – who was a keen amateur – he started taking photographs, developing films and making his own prints. Photography was a vey popular hobby at that time and he spent hours in an improvised darkroom, which was a bathroom.

He is a self- educated photographer relying on the extensive photography library, workshops and private lessons from other successful photographers. As many others – he followed the technological progress and switched to digital photography only to find that he prefer the hands-on process and switched back to analog photography. Sergey likes the complete control of the process, the feeling when the image appears in front of your eyes. He would like to preserve the old way of making photographs by making his own developers and chemistry using some of the formulas from the end of the 19th to the beginning of the 20th century, producing his own silver gelatin prints.

At the moment Sergey is working on the historical process from the 19th Century – Wet Plate Collodion. It can be compared to the instant photography of Polaroid – when you have a final picture in your hands in a few minutes after it’s taken. Depending on the type of work he does – he use all sorts of formats: from 35 mm for the street photography to 5×7 view camera for portraits and architecture.

He has been living in Ireland since 2001. The first few years Sergey spent in the West, Co. Mayo, since 2006 he has been settled in Greystones , Co Wicklow.