Ailbhe Greaney, A View Is Where We Are Not 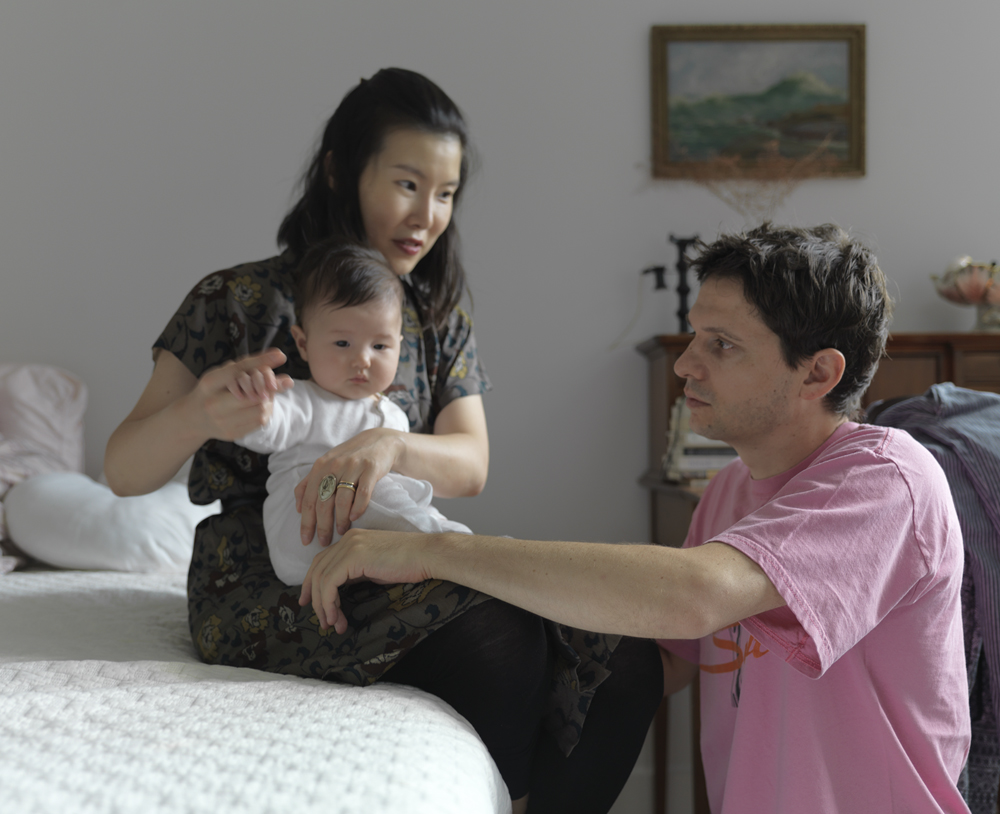 This work is an exploration of place and the impact that both place and space have on relationships between persons. It is an investigation on the nature of ‘Home’.  It endeavors to picture, not individuals who have been left behind, but individuals who have left ‘of’ themselves behind.  Presented as diptychs these images present people who have left their first home, their first family, to create a new home and a new family in a foreign place.

These subjects have differing experiences of this new place. Some are expatriates by choice, some by necessity. To leave a place of one’s free will, however, does not always presume a singularity of heart and mind. It is this in between area – which exists in the mind – that is explored; one where loss, hope, memory and imagination create a potency of feeling towards the place in which they do, and yet do not, live. Here, lives are predicated on the hope of one day coming home, or on the fear of one day being forced home. Sometimes the wish and the fear are the same. And, sometimes, this plus time turns potency to abjectness, where the actual reality of a home once hoped for becomes something feared for its potential strangeness.

Where it was possible to visit the subject’s first home, diptychs were created between old and new home. Where it was impossible to visit the place of their birth a ‘third place’ was recreated, thereby forming an imagined diptych, to represent both places in one, which is Neither Here Nor There. This work explores the camera’s ability to create such a ‘third place’ and to realise the imaginary aspects that embody any emotive place. The work studies the transformative powers of photography within our culture, particularly as these powers relate to the reformulation of place and the reconfiguration of memory. This work acknowledges that in a world where freedom of movement is paramount, some people live with an image of home that exists only for them in a photograph or their mind’s eye.

A second strategy within the work reflects on the use of technology in navigating these divides, and in the creation of an impossible View. Again, photographing subject’s living away from ‘Home’, the work explores the use of Skpye in the creation of a virtual ‘Family Portrait’. Operating in diptych and triptych fashion, the subject’s family creates a portrait of the subject through Skype in one place, at the same time as a ‘traditional portrait’ is being made in another. In this way the family portrait may be constructed to represent its visualisation across time and space. Whilst living in a technologically advanced age, it can often be the ‘simplest’ form of communication that is the most difficult to achieve.  This project seeks to explore a climate whereby images of people, rooms, trees may be transported within seconds via the internet, but where the viewer may not be able to look upon the actual face of the sender, or the actual room from which it is sent.  In this way a person and/or their home-place may be navigated only via representations/simulacrum from the immediate past, with the present out of reach. Thus the very nature of photography, its historical use as a means of communication and tangible record, is explored in a new contemporary, social, technological context.

In some cases never having seen the first homes of these people first hand is an essential aspect in the creation of these photographs. Inspired as they are by the concept of home that exists in our minds, hearts and imagination, as something entirely unique and of our own creation and which is thereby transportable. Here the identity of ‘Home’ is dependent on a kind of mutable distinction and is only known when compared with what it is not or what it could be.

The photographs have progressed over time to encompass people living between Ireland, The UK, Europe, North East Asia, India, South America, Canada and The United States, including single people, couples and families. Often with these people home is identified through another person. In the case of young families, the presence of a third represents the creation of a third place, which at last may be called home.

In leaving for something new, these people have themselves become something new together. This, it seems, is the essence of all leavings.

Ailbhe Greaney was born in Galway, Ireland in 1979. She holds a B.A. (Hons) Degree in Communication Studies from Dublin City University and an MFA with Distinction, in Photography and Related Media from the School of Visual Arts, New York. She is the recipient of the Fulbright Award 2000, Aaron Siskind Memorial Scholarship 2000, SVA MFA Chairman’s Award 2000, SVA Graduate Assistantship 2001-2003, The Arts Council of Ireland Visual Arts Bursary 2006 and The University of Ulster Research Institute Art & Design (RIAD) Grant 2008, 2010 & 2011. She has worked as a Curatorial Intern under Jennifer Blessing at the Guggenheim Museum New York, as Editorial Assistant at Blind Spot Magazine New York and as Advanced Digital Imaging Artist with Lux Imaging, New York. She is currently Lecturer in Photography, B.A. (Hons)/MFA Photography, at the University of Ulster, Belfast. Her work has been published and exhibited both nationally and internationally. It is held in the collections of the School of Visual Arts New York and the Arts Council of Northern Ireland.